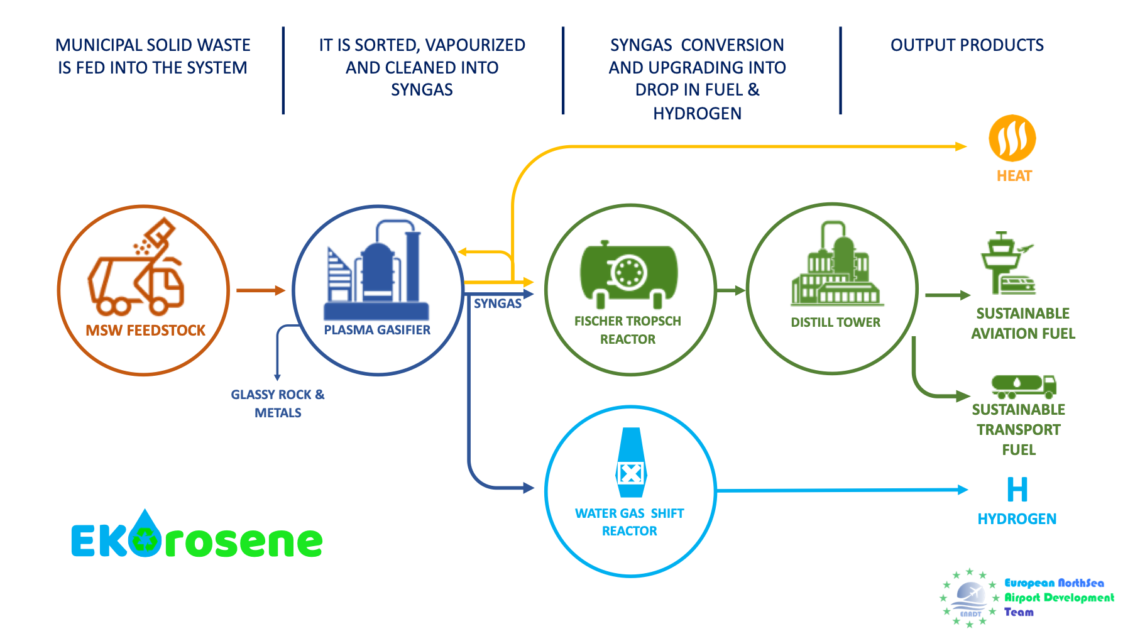 ENADT is taking the initiative to develop a highly efficient MSW gasification plant with Fischer-Tropsch reactor coupling, which can be fed with MSW and recycle it into clean burning sustainable jetfuel (EKOrosene®) and other sustainable fuels reducing net greenhouse gases.

In the draft Sustainable Aviation Agreement, the Minister agreed that by 2030 14% of the jetfuel used in aviation in the Netherlands will be sustainable and by 2050 the entire fossil kerosene requirement of aviation will be replaced by sustainable alternatives.

In order to achieve the 14% blending rate, approximately 660,000 tonnes of sustainable fuel must be produced annually.

The current production of biofuels is insufficient to meet the 14% standard in 2030. On the one hand there is insufficient feedstock available for the current form of biofuel production, and on the other hand other alternatives based on direct air capture are simply not yet scalable and far too expensive. It is therefore essential to quickly find an alternative feedstock that can serve as a basis for a cost-efficient and climate-neutral production of sustainable aviation fuel in the desired volumes at an acceptable price.

Well, there is an alternative feedstock already available in large quantities!

Increasing population leads to an increase in MSW which is a big issue in every country. The MSW can be managed by landfill and incinerating. The disadvantages of landfill and incinerating are carbon dioxide and methane emission. Although a part of the waste streams can be reused and recycled, in the end it will be garbage or become non-recyclable. In order to add value of MSW, the conversion of MSW to synthesis gas is the way forward!

The volume of municipal solid waste (MSW) streams in the Netherlands that are suitable for use as feedstock for the production of synthesis gas (syngas), is approximately 7,500,000 tonnes. The gasification of the MSW streams into Syngas(a combination of carbon monoxide and hydrogen) from which sustainable aviation fuel and other fuels and chemicals can be produced via the Fischer–Tropsch process[1]– a collection of chemical reactions that converts a mixture of carbon monoxide and hydrogen into liquid hydrocarbons – is the ultimate solution for the ever growing waste streams and the fossil fuel use within the Aviation industry, shipping, and heavy road transport industry.

Similar initiatives are taking place in the UK, California and Canada. The process of making syngas out of waste is technically matured and scalable, so is the production of syngas into fuel. ENADT is taking the initiative to develop a production plant in the Amsterdam region for the production of EKOrosene (sustainable jet fuel) by means of a MSW gasification plant with Fischer – Tropsch coupling, which is fed with MSW streams. ENADT is planning to start production in 2022/23.

[1]The process was first developed by Franz Fischer and Hans Tropsch at the Kaiser-Wilhelm-Institut für Kohlenforschung in Mülheim an der Ruhr, Germany, in 1925.